Winchester were joined by Bartholomew School (Oxford) and Southampton Spitfires to play the round-robin tournament. Only a handful of Coxford Tigers players where available on the day and so they joined forces with the Bears to ensure that the newest of the four HYRL founding teams were represented.

Thankfully the sun shone on what turned out to be a magnificent day of rugby league on the south coast, with each team tasting one win and one defeat, proving that the league is already hugely competitive right from the off.

The sun brought out a healthy crowd of around 50 parents and relatives, all showing great support and giving appreciateive applause after every game.

There were a few knocks and bumps as you'd expect but no serious injury concerns and the first aiders were largly reduced to spectators most of the time. 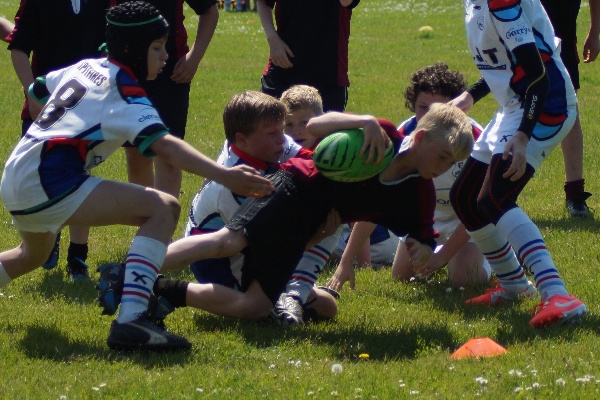 Bartholomew School cross for a try against Southampton

Following the last game of the day coaches and match officials gave group feedback and each team will now be able to focus on their player development and recruitment for the next few weeks before meeting again in June.

PLEASE NOTE that due to an oversight by the Pitchero network that hosts this website we are currently unable to protect photos. Therefore we will be uploading the photos from this festival to www.southampton-spitfires.co.uk later this week because a safeguarding filter is already in place. Teams should contact HantsYouthRL@Gmail.com if they wish to obtain a set of photos of their team in action.

Contact details for each club can be found here